Welcome to the Green Community Corner presented by National Grid. Here you will be able to find the latest information about Barclays Center’s commitment to environmental sustainability, green initiatives and much more.

Reduce stress off the NYC Power Grid by participating in a demand and response program.

Save an average of 555 trees per year by purchasing eco-friendly housekeeping consumables.

RTS helps divert 24 tons recyclable material away from Barclays Center on-average each month. This happens through a variety of ways including donating gently-used furniture to local businesses or organizations in-need, using confiscated items such as lighters to create an art installation and most recently, recycling 14,000 pounds of carpet.

In 2017, Barclays Center strategically partnered with recycle track systems and eco products in an effort to make the area zero waste compliant through innovative waste and recycling management, and providing sustainable disposable products.

In 2013, the U.S. Green Building Congress awarded Seed Silver Certification for new construction to Barclays Center, for its sustainable design and construction methods.

In 2015, Barclays Center added a 135,000 square foot green roof to the top of the arena. The roof is covered in sedum to catch rainwater and provide relief to the Brooklyn sewer system.

In 2015, Barclays Center joined millions of people and organizations worldwide in “going dark” for World Wildlife Fund’s Earth Hour, and international event in support of the environment. 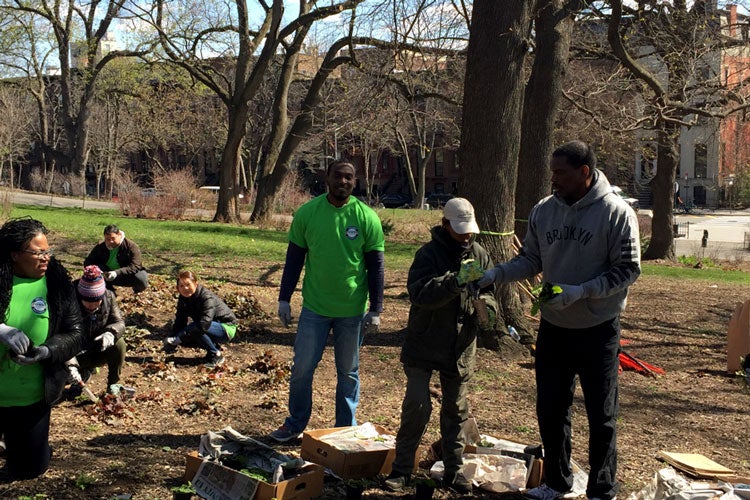 Fort Greene Park has plenty of Brooklyn’s history within its boundaries. The Nets and National Grid teamed up to help with the upkeep of one of New York City’s largest and most iconic parks.

GOING GREEN WITH THE NBA

The NBA is spreading the sustainability message, educating basketball fans nationwide about the benefits of environmental stewardship and green building.

Barclays Center will join millions of people and organizations worldwide in “going dark” for World Wildlife Fund’s Earth Hour, an international event in support of the environment.

85% of on-site generated construction waste was diverted from landfill while 56% of the total building materials were manufactured using recycled materials.