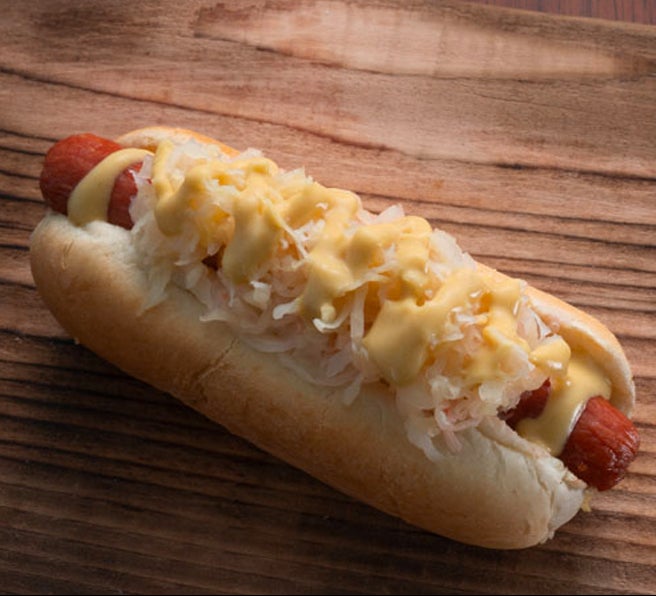 Saul Bolton opened The Vanderbilt with a mission in mind: to make great sausages.

“We’re all about sausages,” said Bolton. “So we started in the facility making hot dogs, weisswurst, knockwurst, cheddar brats, across the board, everything we could get our little hands on.

“You can get the books, get all the stuff together, but you don’t make a great sausage without good meat, a lot of hard work and attention to detail.”

From there, Brooklyn Bangers was born. Bolton and his team brought their sausages out of the restaurant to flea markets — “It was like a guerilla affair,” said Bolton — and now they’re available in other restaurants, supermarkets, and at Barclays Center, where his Smoked White Cheddar Brat is one of the arena’s most popular items.

“We’re able to bring our sausages — delicious sausages I must say — the cheddar brat’s there, the weisswurst is there, our hot dogs are also there,” said Bolton. “We have kosher hot dogs by the way, which are made in Williamsburg. The rest is history. Now we’re just super happy to be there.”

After working with premier chefs Gordon Hamersley, David Bouley and Eric Ripert, Bolton opened Saul Restaurant on Smith Street in Boerum Hill in 1999. The restaurant earned a Michelin star for the first time in 2005 and maintained it for eight years.

In 2010, Bolton and partners decided to open a gastropub in a sunny corner spot just a few blocks from where Barclays Center would soon open. Sausages had always had a place at Saul Restaurant, but at The Vanderbilt they became the star of the show.

“To be able to take the food at Saul, which was catering to a specific demographic, maybe a little more expensive, and bring it to Prospect Heights on Vanderbilt Avenue in a more relaxed setting with good beer, it’s a dream,” said Bolton. “We can crank good music and really have a casual good time. That’s what I came for.”

The Vanderbilt is located at 570 Vanderbilt Avenue in Prospect Heights at the corner of Bergen Street. Saul Bolton is also the Culinary Director of The Norm at Brooklyn Museum.