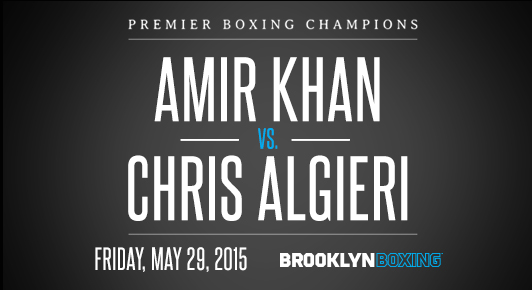 “I have happy memories of New York having made my successful U.S. debut there against Paulie Malignaggi in 2010,” said Khan. “I’m delighted to now be fighting there once again against another local hero in Chris Algieri. Algieri has shared the ring with some tremendous fighters and shown great skills in those fights so I know I will need to be at my very best when we meet. In all my fights I bring excitement, speed and skill and can guarantee more fireworks on May 29 at Barclays Center.”

“I am very excited to get back into the ring and to be fighting here in New York,” said Algieri. “Fighting at Barclays Center, where I won my world title just under a year ago, is an added bonus. Amir Khan is a tested champion and is the matchup that I wanted. I believe this is a fight that will bring the best out of me.”

“I am thrilled to be returning to Barclays Center for another terrific PBC event,” stated Lou DiBella, President of DiBella Entertainment. “Amir Khan is hands down one of the biggest names in the sport.  Coming off a huge win over Devon Alexander, Khan is on the short list to participate in a future mega fight. He must first get by the hometown fan favorite, Algieri. This is a fight that Chris wanted. He is looking to show the world that he belongs, at the arena where he shocked the world and upset Ruslan Provodnikov for a world title. We expect an electric atmosphere come May 29th.”

"We are excited to bring two outstanding fighters in Amir Kahn and Chris Algieri to Brooklyn,” said Barclays Center CEO Brett Yormark. “Khan is among the most talked about and dynamic fighters in the sport, and Long Island’s own Algieri had his career defining win at Barclays Center last June. Our first PBC event in Brooklyn on April 11 was a huge success and we expect another big night on May 29. After less than three years in existence, Barclays Center is cementing itself as the premier boxing venue in the country.”

"We are thrilled to present this must-see matchup between of one of the sport's true superstars, Amir Khan, and the tough-as-nails New Yorker, Chris Algieri, fighting in front of his hometown fans," said Jon Slusser, Senior Vice President, Sports, Spike TV

Tickets for the live event, which is promoted by DiBella Entertainment and Star Boxing, are priced at $250, $150, $75 and $45, not including applicable service charges and taxes, and are on sale tomorrow, Thursday, April 16th at 2 p.m. ET. Tickets are available at www.barclayscenter.com, www.ticketmaster.com and at the American Express Box Office at Barclays Center beginning Friday, April 17 at noon ET. To charge by phone, call Ticketmaster at (800) 745-3000. For group tickets, please call 800-GROUP-BK.

A 28-year-old star who first burst onto the scene with his silver medal-winning performance at the 2004 Olympics, Khan is an exciting fighter who has shown incredible offensive skills and improved defensive technique since moving up to the welterweight division. His last two fights have come against former welterweight world champions Devon Alexander and Luis Collazo. He cruised to victory in those two contests and now looks to defeat another former champion when he battles the tough Algieri on May 29. Fighting out of Bolton, United Kingdom, the former super lightweight world champion is eager to make an impression in his first start at Barclays Center.

Algieri rose to fame in June 2014 at Barclays Center when he upset Ruslan Provodnikov for a super lightweight world title. The 31-year-old returns to the scene of his greatest triumph on May 29 to take on the British superstar Khan. The former kickboxing champion from Huntington, New York, built his undefeated boxing record on the strength of his excellent movement and skill with the jab. His victory over Provodnikov earned him a shot at Manny Pacquiao in Nov. 2014, a bout that Algieri ultimately lost.  He had previously defeated strong contenders Mike Arnaoutis and Emanuel Taylor on the way to his world title.