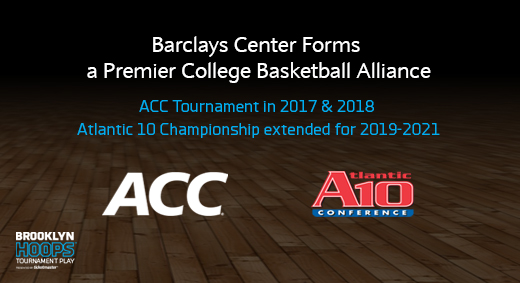 “It’s exciting to bring the elite ACC and its storied men’s basketball tournament history to Brooklyn,” said Barclays Center CEO Brett Yormark. “We’re looking forward to extending our Atlantic 10 partnership starting in 2019 through 2021 and creating competitive inter-conference doubleheaders with the ACC and the A-10. I want to thank ACC Commissioner John Swofford and Atlantic 10 Commissioner Bernadette McGlade for their commitment to Barclays Center and to Brooklyn. It’s clear that our position with both Conferences validates Barclays Center as the leading college basketball venue in the country.”

“We are pleased that the ACC Basketball Tournament will be played at Barclays Center in 2017 and 2018,” said ACC Commissioner John Swofford. “Barclays Center has quickly emerged as one of the premier sports and entertainment venues in the world and Brooklyn is a hot spot within the New York marketplace, which is an important part of our league’s new footprint. I appreciate the cooperation and ongoing relationship with Bernadette McGlade and I want to thank Brett Yormark for his tireless efforts as this is an outstanding opportunity for our players, coaches, alumni and fans that continue to support the ACC and our 15 member institutions.”

“Playing the A-10 Championship in Barclays Center is fantastic, and securing a three year extension is a great opportunity for the conference.  Working in a collaborative way with Brett Yormark and John Swofford to negotiate a plan that is a win-win for all involved has been a good experience,” stated Atlantic 10 Commissioner Bernadette V. McGlade. “This agreement that creates a scheduling partnership, the ability to play the A-10 Championship in other areas of our footprint and returning to the NY market is exciting, securing a solid future for the A-10.”

The ACC Tournament has been held in seven different cities and 11 venues since the inaugural event in March of 1954. The Greensboro (N.C.) Coliseum serves as host in 2015 and Washington D.C. will host the tournament in 2016.