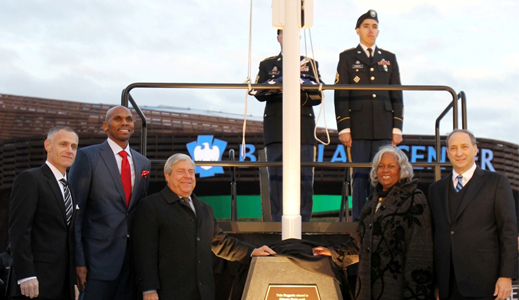 In celebration of the triumphant return of major professional sports to Brooklyn, Barclays Center and the Brooklyn Nets held a ceremony today to commemorate the new home of an Ebbets Field flagpole that stands outside of Barclays Center.

After the Dodgers’ former home, Ebbets Field, was demolished in 1960, the flagpole was later donated to a VFW post on Utica Avenue in the Brooklyn neighborhood of East Flatbush. It stood at that site, which later became the Canarsie Casket Company and then a church, until Bruce Ratner secured the historic flagpole in 2007, with the goal of positioning it at his planned arena in Brooklyn, which opened in September of this year. It was Borough President Markowitz who had alerted Ratner about the availability of the flagpole.

At today’s ceremony, the American flag and a Brooklyn Nets flag were raised on the restored flagpole and a plaque signifying the history of the flagpole was unveiled.

“We are proud that such a historic symbol of Ebbets Field will now stand permanently outside of Barclays Center to connect the borough’s great sports past to its present,” said Bruce Ratner. “The memories of Ebbets Field and the Dodgers, most notably the 1955 World Series championship, will always be an important part of Brooklyn’s history. Now fans from throughout the borough can take enormous pride in seeing a piece of Ebbets Field en route to watching Brooklyn’s new professional sports team, the Brooklyn Nets, at Barclays Center.”

“Bravo to the Brooklyn Nets and to Bruce Ratner for this fitting tribute to our beloved ‘bums’ of yesteryear—the Brooklyn Dodgers,” Borough President Markowitz said. “There is no better way to honor the Dodgers’ legacy in Brooklyn than by raising the Ebbets Field flagpole with Sharon Robinson, the daughter of Jackie Robinson, a product of Brooklyn and great American hero. Together, this Ebbets Field flagpole and Brooklyn Nets flag are a ‘home run’ and a ‘slam dunk,’ marking the transition from one great tradition of major league sports in Brooklyn to another. Today, we raise a Nets flag on a flagpole from one of the most famous stadiums in baseball history, Ebbets Field; soon we raise an NBA championship banner into the rafters of the greatest arena in the country, Barclays Center.”

“The great sporting tradition of Ebbets Field and the Dodgers has motivated and inspired everyone involved with the Nets’ move to Brooklyn,” said Onexim Sports and Entertainment President Irina Pavlova. “We are honored to celebrate their unforgettable legacy today and to make that memory a permanent part of our new home.”