Gospel has a home 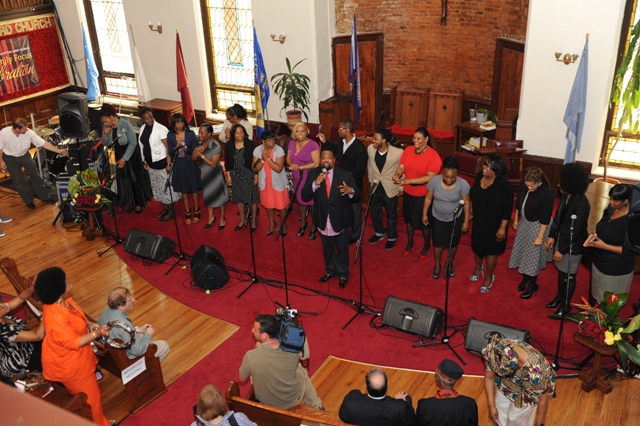 Thursday morning, the lively gospel music of Bishop Hezekiah Walker and the Love Fellowship Choir filled the House of the Lord Church in Brooklyn. Those in attendance witnessed a rousing two-song preview of a newly scheduled show at the borough’s Barclays Center, which opens this fall.

Walker, who grew up in nearby Fort Greene, used to play with his friends by what is now known as the Atlantic Yards. He remembered everyone daydreaming about their future, and though others offered sports options, Walker went a different direction.

“I said I was going to be a gospel singer, and they all laughed at me,” Walker said. “But most of them that were laughing at me ain’t laughing no more, because it came to pass!

“I certainly am really happy that the same place that I played upon is the same place I will be able to entertain. I can put out what was put inside of me a long time ago — the good sound of gospel music. And look out for it, because we are bringing gospel music to the Barclays Center in a major way. What I used to bring to Manhattan, now I’ll be bringing to Brooklyn.”

Walker and the Love Fellowship Choir will perform as part of the “Night of Hope” concert at Barclays Center on December 10. The event benefits The Children of Haiti Relief Fund and features guest performances by CeCe Winans, Fred Hammond, Donald Lawrence and more.

Yet that will be only one of three major gospel events, also including ‘The King’s Men’ (Kirk Franklin, Marvin Sapp, Donnie McClurkin and Israel Houghton) on October 14 and Verizon’s How Sweet the Sound, hosted by GRAMMY award-winning artists Donald Lawrence and Yolanda Adams, on November 4.

“It’s always been a dream of mine to have gospel in this arena since Day One,” said Atlantic Yards developer Bruce Ratner. “Bishop Walker introduced me into gospel music in a real way. Gospel music was a music that existed before our nation existed as a nation. It’s been part of our country, and now it’s a part of our borough. Brooklyn is known as the ‘Borough of Churches,’ so how fitting that the Barclays Center will be the new home for gospel music.”

Joining Ratner and Walker as speakers were Rev. Dr. Herbert Daughtry, Pastor of The House of the Lord Church and Founder of the Downtown Brooklyn Neighborhood Alliance. Both spoke of the commitment Ratner made to ensuring the community was included in the Atlantic Yards project, and more importantly – his commitment to following through on their agreements.

Daughtry traced the roots of their relationship to 2004, when the DBNA first came to an agreement with Forest City Ratner on fostering arena programs, as well as the development of a state-of-the-art health center and an intergenerational complex. Sharpton pointed out that the setting proved fitting because Daughtry’s leadership helped to define the Community Benefits Agreement that swayed those with questions to support the project.

The Brooklyn native knew the import of bringing gospel to the outer boroughs, and wanted to help find a home for the talent that had played such a large part in his life.

“Gospel now has a home. We have long been out as a talent with no home. We will now have a home and an address where you can kick up your feet and praise the Lord in the correct rhythm, and with the correct beat. And if you’re a gospel singer, you have yet to perform if you haven’t performed at Barclays Center!”