Juan Gabriel, whose career and creativity continue to soar four decades after his start, has announced that his new production, MéXXIco Es Todo 2016 Tour, will come to Barclays Center on Sunday, Oct. 9.

Tickets to the show will go on sale Friday, June 3 at 10 a.m. and can be purchased at www.ticketmaster.com, www.barclayscenter.com, or by calling 800-745-3000. Tickets are available in person at the American Express Box Office at Barclays Center starting Saturday, June 4 at noon (if tickets are still available).

Juan Gabriel continues to create more elaborate and exciting productions with each new tour. MéXXIco Es Todo 2016 Tour will feature a cast and crew of more than 100 people to bring Juan’s vision to the stage. The show includes 50 mariachi and orchestra players, 10 singers and 20 dancers.

Juan is one of the Latin industry’s most successful artists since he started in the 1970s. Exuberant in his performance style and prolific in his songwriting, Juan has penned songs in diverse styles -- rancheras, mariachis, ballads, pop and rock -- for himself as well as other Latin legends.

Juan’s appeal and career continue to soar as a staple on the Latin Charts, and he’s having more success than ever in recent years.  In a 10-month period in 2015-2016, he had three albums at No. 1 on Billboard’s Top Latin Albums chart. Juan is the seventh artist to have three albums in the Top 10 simultaneously.  His Los Duo album was the top-selling Latin album of 2015, and his critically acclaimed tour was the highest grossing of the year, out earning all his competitors by 2 to 1.  Juan is getting his own scripted 13-episode television series, “Hasta Que Te Conocí (Until I Met You)” which will chronicle his journey from Ciudad Juarez, Mexico, to becoming one of Latin America’s top singer-songwriters. 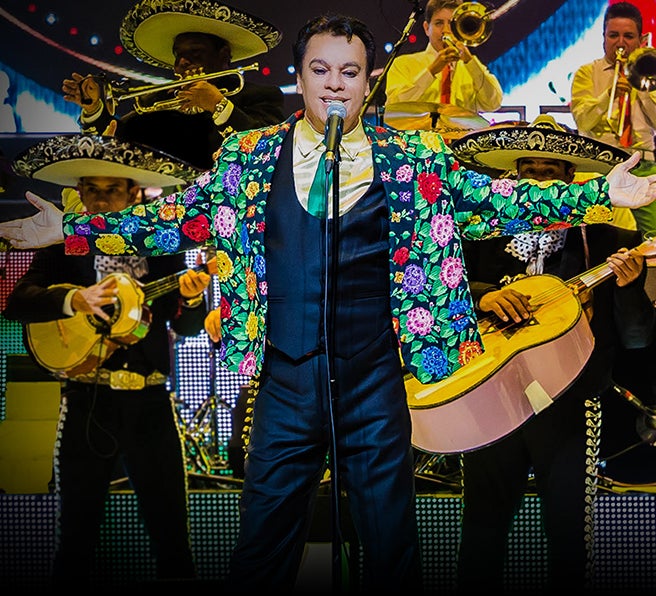 Due to the unfortunate passing of Juan Gabriel, the October 9 concert at Barclays Center has been canceled. Tickets will…
Info
SHARE THIS NEWS