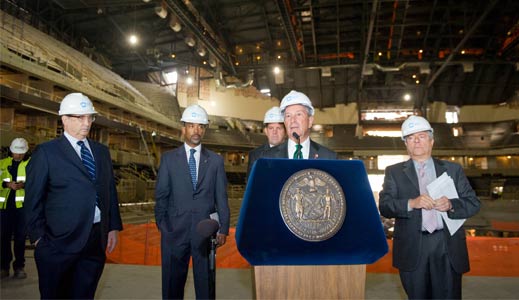 “Decades – 10, 20, 30, 40 years – from now, all during that time, millions of people will be coming through (the Barclays Center), right where you are here, and yet today is one of the most important days in the history of this arena,” said FCRC Chairman and CEO Bruce Ratner. “You’ll have championships here, whether it be basketball, college, boxing or equestrian acts – everything possible in the world, and it’s one of the most important days because we’re hiring 2,000 people that are local residents. We’re going to be greeted by ushers and porters and ticket takers from our own communities, people who have been trained by Disney, and trained by AEG and Levy Restaurants.”

The arena, which will seat 18,200 for basketball and 19,000 for concerts, is about 75-percent complete and on schedule to open in September. Designed by SHoP Architects and AECOM, the building will offer an intimate seating configuration, one that Mayor Bloomberg compared favorably to Coney Island’s 7,500-seat MCU Park, home of the New York Mets’ Single-A affiliate Brooklyn Cyclones.

“I just finished a tour of what will be the new home of the Brooklyn Nets, and let me just tell you I am glad I already have my tickets for next season,” Bloomberg said. “We’ll have a good chance to watch great basketball in a wonderful arena. What strikes you when you look down there is everything’s close to the court. It reminds me of the Cyclones’ stadium in Coney Island, where you feel like you’re right on the field, and I think – whether you’re at the very top or right at courtside – you’re going to feel a contact with the players you can’t get at any stadium I’ve ever seen.”

The arena employees will serve as the front lines of that setting, and will number up to 800 for any of the arena’s 220 event dates, with an estimated 1,850 part-time jobs (up to 30 hours per week) and 150 full-time positions. They’ll be drawn from a pool that offers priority to residents of Community Boards, 2, 3, 6 and 8; graduates of Broklyn United for Innovative Development’s Training Program; and NYCHA residents of Ingersoll, Whitman, Farragut, Atlantic Terminal, Wyckoff Gardens, Warren Street, Lafatette Gardens and Gowanus Houses.

Job fairs will be held in June, July and August at locations near the arena to fill the majority of the positions. AEG, which will assist in Barclays Center operations management, and Levy, which will oversee food services, will each meet with local community boards and elected officials to discuss hiring plans.

“The total commitment to this neighborhood is staggering,” said NYCHA Chairman John B. Rhea. “Especially the effort that the team at Forest City Ratner has done to connect local residents to meaningful employment with real opportunities for growth, not just here at the arena, but beyond.”

The employees will be trained by the Disney Institute and once the arena has opened, FCRC will report quarterly on the number of employees and the neighborhoods that they are from. Inspired by the commitment to local job creation and the thought of another tourist hotspot for the five boroughs, Mayor Bloomberg proved to be in a lyrical mood on national “Poem in Your Pocket” Day:

Coming to Brooklyn is always a party
Raising the roof, just me and Marty
But with the Nets, much better it’ll be:
Forget about Marty and me – it’s Jay-Z.