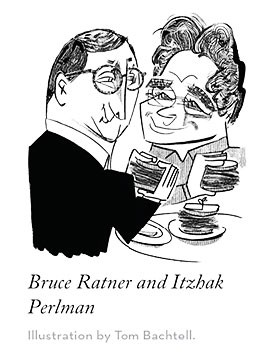 The New York “The Talk of the Town”

Have you heard this one?
Caloric Sounds

Bruce Ratner, the real-estate developer, arrived the other day at Lansky’s Old World Deli, on the Upper West Side, where he quickly spotted his friend the violinist Itzhak Perlman.

“How are you?” Ratner asked.

“I’m cold,” Perlman replied. “My tuchus is in the draft.”

The maestro and the developer, sixty-seven and sixty-eight, were meeting to discuss Perlman’s upcoming event—an evening of cantorial music, featuring the world-famous Cantor Yitzchak Meir Helfgot, who will be accompanied by Perlman himself—at the Barclays Center, Ratner’s Brooklyn arena, on February 28th. The two men first met more than thirty years ago, through their daughters, and they are close enough that, for example, Ratner knows that Perlman, whom the world sees as one of the greatest living musicians, is in his heart a Borscht Belt comedian, and will always start a joke, “Have you heard this one?” (Ratner also knows: “You never say you have heard this one.”) A few days earlier, at Ratner’s invitation, Perlman had performed the national anthem on the violin at a Brooklyn Nets game. (“No finger-synching!” he exclaimed, in reference to Beyoncé’s rendition of the anthem at the Inauguration.)

They moved to the back of the restaurant, where it was warmer, and where the talk turned not to cantorial music—Jewish liturgical singing, usually performed in synagogues—but to food.

“I wish they had a diet seven-layer cake,” Perlman said, sighing.

“I grew up on seven-layer cake,” Ratner said. “My mother would bring it home to us in Cleveland.”

“Huh,” Perlman said. “I always thought it was only a New York deal.”

“We called it Doberge,” Ratner said.

“No, Doberge is not seven-layer cake,” Perlman replied sternly, in his rambling baritone. “Doberge has a hard, candylike icing.”

Ratner: “Mine had the light chocolate on the outside, and then the darker chocolate. You mean that wasn’t Doberge?”

Perlman: “Of course it wasn’t Doberge! It was seven-layer cake. Your mother mistakenly called it Doberge.”

Ratner, who has a you-go-first, self-deprecating quality that has served him well in dealing with the community groups that have opposed his development projects over the years, responded, “You mean my mother was wrong about something?”

Circling back to the Barclays Center event, Perlman explained that, in addition to Cantor Helfgot’s magnificent voice, there would be klezmer music, played by him and others, and Yiddish standards would be sung. “Look, for me a show is like a meal,” he said. “You want to have variety. No matter how much you like dessert, it’s not going to be as good unless it comes at the end.”

That’s because food and music have so much in common, Perlman observed. “When I teach, and I talk about sound, I say, ‘You know, you sound like yogurt, and I want you to sound like ice cream.’ Nothing wrong with yogurt. It’s healthy. But I don’t like a healthy sound. I want a caloric sound.”

Ratner ordered a hot pastrami sandwich, “on the fatty side,” while Perlman opted for pastrami and tongue, with French fries and onion rings for the table.

“Let me ask you,” Perlman said to Ratner. “Will there be somewhere for people to dance?”

“You mean on the stage?”
“No, in the aisles. Because when I play the klezmer people dance!” Perlman, who gets around on an electric scooter, threw his arms in the air and pumped them. “Hey, hey, hey! All it takes is five or six people to start it and it becomes contagious.”

The food arrived, and for some minutes chewing was the only sound—most certainly a caloric one—until Perlman, wiping his mouth, said, “I’ll tell you what’s good at the Barclays Center. Everything! The guacamole! The cheeseburgers! The fish-and-chips are also very good.”

“I love the fish tacos,” Ratner put in.

For the Helfgot crowd, Ratner noted, special accommodations would be made, including catering from Abigael’s, a kosher restaurant in Manhattan. He added that cantorial music was not that far removed from Gregorian chants, and a fair number of Christians might also come.

At the mention of Gregorian chants, Perlman asked, “Have you heard this one?” Ratner went silent, waiting expectantly. “So there was this monastery,” Perlman said, “and every morning the head monk chants, ‘Good mo-o-orning,’ and the other monks chant back, ‘Good mo-o-orning.’ And then every evening the monk chants, ‘Good ev-en-ing,’ and the other monks chant, ‘Good ev-en-ing.’ Well, there was this one guy, who came in from Europe, and he had the jet lag, and he got all confused, so when the head monk says, ‘Good mo-o-orning,’ he says, ‘Good ev-en-ing.’ And the monk says”—here Perlman put on his richest baritone, singing cantorially—“ ‘Someone chanted ev-en-ing,’ ’’ to the well-known tune from “South Pacific.”