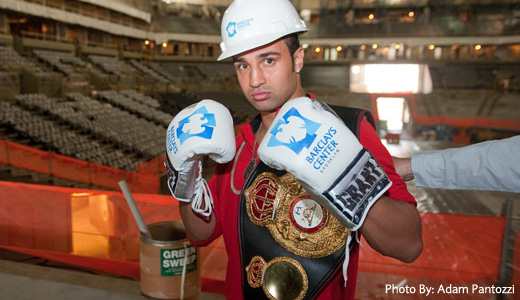 Friday at the Barclays Center, the champ arrived.

“Even after I won it, I didn’t think about the belt,” Malignaggi said. “I was just thinking ‘Barclays.’ I stepped back in the dressing room after, and Robert Diaz from Golden Boy was like, ‘Barclays! Here we come!’ And I was like, ‘Yup — that’s right!’ We were talking about it all the way back in Ukraine, but now we’re here. I would be very surprised if I wasn’t the headliner, I’ll tell you that.”

While an opponent and the details remain in flux, Malignaggi said that having the chance to lead off the arena’s “Brooklyn Boxing” franchise was a major motivator for him during the last three years. The 31-year-old said he didn’t want to visit family and drive around staring at billboards of two other fighters, thinking it was supposed to be him.

The Barclays Center will open with a JAY Z concert on September 28, and then feature 220 events in its first year, including 12 fights produced by Golden Boy Promotions, which manages Malignaggi. Everything, from the win to the timing, has put Malignaggi in a position to ensure a raucous, supportive crowd if things proceed as planned.

“Our goal — nothing has been determined yet — is to have Paulie defend his title here in Brooklyn,” said Brett Yormark, President and CEO of Brooklyn Sports and Entertainment. “What better place? This building is an aspirational venue for anyone that’s ever called Brooklyn home. Our goal is for people growing up on boxing to one day say, ‘I want to box at the Barclays Center.”

Malignaggi said the borough “is always in his heart,” and he’s glad that people from Brooklyn have a state-of-the-art facility for large events, one that will allow them to be close to the action from any seat in the arena.

“I was picturing it as soon as I walked in,” Malignaggi said. “The cool thing about the arena is it seems like everything is right on top of you. It gives it a real homey feeling, and it will make it real tough for anyone visiting to fight here.”